Over the weekend the news cycle was dominated by the release of Donald Trump and Billy Bush’s 2005 lewd “hot mic” conversation. For the sake of argument let’s assume someone actually engaged in the conduct Trump describes on the tape. And, as Days of Our Lives, where the infamous Access Hollywood bus was ferrying Trump and Bush, is filmed in California, Trump would be subject to that state’s law, rather than his native and home New York’s.

The first thing Trump described was being automatically attracted to beautiful women and kissing them without obtaining their consent. That’s simple battery, a violation of Penal Code section 242. Contrary to popular perception, a battery can occur any time there is an ‘unwanted or offensive touching.’  Simple battery doesn’t require violence, pain, or injury. A violation of Penal Code section 242 is a misdemeanor. It carries up to a $2,000 fine and/or six months in jail.

Next came Trump’s “Grab ‘em  by p—-“ comment. That’s almost certainly a violation of Penal Code section 243.4, Sexual Battery. Sexual battery occurs when one person touches the intimate part of another person –without consent – for the purpose of sexual arousal. The code also requires the victim to be restrained. However, restraint does not have to be physical restraint. Rather, the unlawful restraint can happen when a person feels their liberty is being controlled by words, acts or authority of the other person. In other words, if a person feels as though they can’t get away, or have no choice but to submit to the unwanted touching, that is sufficient to meet the requirement of restraint. Sexual battery can be charged as either a felony or a misdemeanor. Each violation can bring with it a four year term in prison.

When you’re talking about a famous and influential person such as Donald Trump, it’s easy to see how potential victims – for instance Miss Universe contestants who worried they might ruin their chances of winning if they angered the boss – may have felt they had no power to resist Trump’s unwanted advances.

If a person engaged in the conduct Donald Trump described in the “Grab ‘em” comment it could violate other code sections as well. The first one that comes to mind is Penal Code section 289, Penetration With a Foreign Object.  Penetration of any part of a woman’s vagina, however slight, is sufficient to meet the legal definition of this crime. In addition, this crime requires the conduct be accomplished against the victim’s will by force, violence or duress. In the Trump tape example a prosecutor would likely argue the act was accomplished by “duress.” Duress means a sex act occurred because of a direct or implied threat of force, menace, fear of immediate and unlawful bodily injury, violence, danger, hardship or retribution. The last two, hardship and retribution, are the most likely when you’re talking about overcoming the will of a person with less money and less power.

Beyond the Access Hollywood tape, audio of Trump walking backstage at the Miss Universe pageant, where contestants were in various states of dress, has also surfaced. This conduct probably violates California’s ‘Peeping Tom’ statute, Penal Code section 647(j), a criminalizing invading another person’s expectation of privacy. 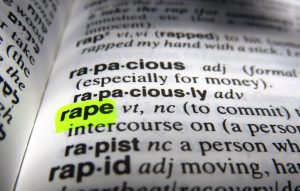 Ivana Trump, Donald Trump’s first wife, has been quoted as accusing her then husband of raping her in 1989. The allegations came out in the early 1990’s during a deposition in the Trump divorce. Reporter Harry Hurt III, formerly a reporter for Texas Monthly and Newsweek, wrote about the allegations in Lost Tycoon:  The Many Lives of Donald J. Trump. Ivana Trump has since stated she did not mean rape in the literal or criminal sense. However, the description of the conduct in Hurt’s book and printed in The Daily Beast would tend to suggest otherwise. One of Trump’s lawyers, a man by the name of Michael Cohen, is quoted in July 27, 2015 interview on the outlet as saying:

Cohen added that there is no such thing, legally, as a man raping his wife. “You cannot rape your spouse,” he said. “There’s very clear case law.”

Apparently Trump’s lawyers are unfamiliar with California Penal Code section 262, Spousal Rape, a crime that carries penalties identical to those for rape – up to eight years in prison. Ivana Trump’s comments were about behavior that, if it occurred at all, most likely would have occurred in New York. It is true New York had a ‘spousal exception to rape.’ But that exception was deemed unconstitutional by the New York Court of Appeals in 1984, more than six years before the Trump divorce deposition and more than 30 years before The Daily Beast Interview. The change in the law came in a case titled, People v. Liberta, 64 NY2d 152. In fact, almost every state has abolished exceptions to rape statutes for married couples on the basis that they violated equal protection.

Sex offender registration is a heavy burden. Registrants have to re-register annually on their birthdays. If they are away from home for more than a couple days they have to register in the city or county they are visiting and they have to promptly re-register when they return home. Failure to meet these requirements is a crime and each and every violation can result in imprisonment. Couple this with the fact that some of these crimes are “strikes” and that means the prison term is automatically doubled.

If any of the statements or accusations in recent news cycles are true, someone who engaged in the kind of conduct Trump has described and/or been accused of, could spend decades in prison, highly problematic if they wanted to be president. And, if elected and then convicted, the grounds for impeachment include conviction of ‘high crimes and misdemeanors.’  It would certainly be a challenge to be the leader of the free world from a prison cell.