Democratic presidential candidate Hillary Rodham Clinton defended an accused rapist 40 years ago. In 1975, then Hillary Rodham ran a legal aid clinic for the University of Arkansas. The clinic was just starting and Clinton was working to position it to provide legal services to the poor. The defendant in question, accused rapist Thomas Alfred Taylor, was initially appointed a male lawyer, but during a hearing asked the judge to replace his counsel with a female. The judge went through a list of female attorneys in the area (apparently there were only six) and asked Clinton to defend the case. 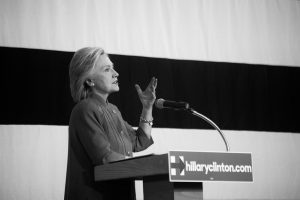 The district attorney assigned to the case and Clinton’s opposing counsel, Mahlon Gibson, later said Clinton didn’t feel comfortable taking the case. He said Clinton didn’t want to defend a man accused of the brutal rape of a child and privately asked the judge to take her off the case. The judge wouldn’t. In the end, Clinton aggressively defended her client; the prosecution mishandled evidence and there were serious problems with the victim’s statements. Clinton obtained a favorable plea agreement, which allowed her client to plead to the lesser charge of fondling a minor. This is what defense attorneys do.

Defense attorneys defend people accused of the unthinkable. And, they do everything they can under the law to get the best possible result for their client. Defense attorneys – and all attorneys – take an oath to protect and defend the Constitution, which guarantees the right to a fair trial. And, the vast majority of us take this oath very, very seriously.

The Constitution is intended to protect all of us. Much of the litigation about specific amendments arises in criminal cases – ones that involve the government trying to convict people accused of some pretty bad things. Defense attorneys believe that in order for the Fifth Amendment’s privilege against self-incrimination or the Fourth Amendment’s prohibition against unreasonable searches and seizures to be afforded to all, they have to be protected in each and every case – not just in the cases where the defendant “deserves” these rights.

When this nation was founded, the framers of the Constitution wanted to create a country in which the rule of law was the law of the land. They had come from a time and a place when a powerful monarch could change the law at whim. They wanted to create a society in which everyone was treated the same under the law. These are lofty ideals that are still a work in progress. In order to accomplish their goals, the founders wrote the Bill of Rights, the first ten amendments to the Constitution. Of these amendments, four of them: the Fourth, Fifth, Sixth and Eighth, deal directly with the rights of the accused. Other amendments, such as the Ninth , though not exclusively about the criminal justice system, have a significant bearing on the legal system including the criminal justice system.

In plenty of cases, criminal defense attorneys are the line in the sand, often the last line of defense, protecting people from government overreach. Ask Robert McDonnell, the former Virginia governor who was prosecuted and convicted on public corruption charges, but whose conviction was over turned because the U.S. Supreme Court ruled that the language in a statute was so broad it could cover nearly anything a politician did. Or, consider Luis v. United States, also decided by the Supreme Court earlier this year.

In Luis, the High Court, in ruling that the government cannot restrain certain assets of a criminal defendant, essentially underscored the importance of the Sixth Amendment’s guarantee that a criminal defendant has the right to counsel of their choice.

Everyone is entitled to a defense. Everyone. Our nation is premised on the belief that the government must prove its case beyond a reasonable doubt. And, that the government must follow certain rules in doing so. Government agents can’t illegally search property because they believe there is an illegal marijuana grow. They can’t throw a person in prison without a trial.  There cannot be a trial unless the defendant has an attorney to represent them. There can be no trial if the witnesses against the accused don’t appear in court.

As a nation, we must demand that all aspects of our society respect the rule of law. There can be no occasion on which a bending of the rules is allowed, lest we find ourselves journeying down a slippery slope to a land of injustice and indignity our forefathers sought to end. This is a large part of what criminal defense lawyers do. Every day we demand prosecutors and law enforcement officers follow the rules designed to protect us all.

Can we afford to sweep away the law because a great majority believe a prisoner has no right to live?  Shall a majority say that the law shall be ignored when the necessities demand?  If this be the case, then there is no longer need for the law. If the law is not strong enough to protect the humblest and weakest citizen it deserves the contempt of all.

In order for our constitutional principles to survive, someone has to represent the accused, the scorned and the despised. Our Constitution cannot withstand a half-hearted defense; a lawyer who doesn’t want to fulfill their sworn obligation because they don’t like the defendant or they don’t like the subject matter. Hillary Clinton knew that. Forty years ago she represented a man she didn’t like who was accused of something horrible, and still, she upheld her sworn duty.

UPDATE: If you want to go deeper into the case, give a listen to this recent NPR story: