Voting twice is illegal. Being registered in two different places at the same time is not. Mr. Trump appears unclear on the difference. 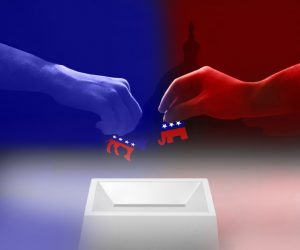 It’s not complicated. There is no system to ‘un-register’ to vote. What happens is this: a person turns 18 and registers to vote in the city/county/state where they reside – say in California.  A few years later this person joins the military or goes to college – say in Virginia. When they get to Virginia they re-register. This person is lawfully registered to vote in both locations, and as long as they only vote once in any given election and in their state of permanent residence, there’s nothing illegal about it.

On January 23, Trump told members of Congress there were three-to-five million illegal votes cast in November’s election. On January 25, Trump tweeted that he was going to ask for a major investigation into purported voter fraud.

I will be asking for a major investigation into VOTER FRAUD, including those registered to vote in two states, those who are illegal and….

even, those registered to vote who are dead (and many for a long time). Depending on results, we will strengthen up voting procedures!

Each county has a system for purging their voter rolls, for taking off unregistered voters because people have moved, been convicted of a felony or passed away. Most cities and counties err on the side of not purging voter rolls too soon. Why? Because if they made a mistake a person who is lawfully eligible to vote could arrive at their polling location only to find their name, and potentially their ability to vote, purged from the voter rolls. This is precisely what happened in New York in April 2016 when many people in Brooklyn found their names had been improperly removed.

Every year voter and civil rights activists bring suit against different counties and states challenging voting laws, including procedures to remove voters from the rolls. In September 2016, a federal court in Ohio ruled that Ohio’s system was unconstitutional. Ohio’s old system was to send a notice to voters to inform them their registration may be cancelled if they haven’t voted in the past four years. A person registered in the Buckeye State could confirm their eligibility by either responding to the notice or voting. However, the court held that the clause allowing someone to be removed for failing to vote violated the Voting Rights Act.

Perhaps it’s just a coincidence that Trump claims there were three million illegal votes since that’s just slightly more than the 2.8 million votes that went to the winner of popular vote, Hillary Clinton. Perhaps not.

What is Trump really trying to do by claiming mass voter fraud?  There are multiple possibilities and more than one of them could be true. He could be trying to undermine confidence in the democratic process – a theory which really only makes sense if rumors about Russian influence over him are true. He could be trying shore up his enormous and fragile ego and bolster his unsubstantiated claim that he didn’t really lose the popular vote. Or, he may be trying to distract both the American public and law makers from paying attention to what he is really doing in the White House.

Trump has spent his first days in office busily undermining the constitution and dashing off ridiculous executive orders that have not been thought out. An executive order on January 30 requires federal agencies to cut two existing regulations for every new rule introduced. (If that’s not the definition of arbitrary nothing is.)

Like his executive order banning Muslims, this new order has not been properly vetted or operationalized. For good or for bad the federal government is a behemoth that cannot shift course on the whims of one man. Federal agencies draft regulations for good reasons: to keep Americans safe, to protect our financial markets, to make sure the food we eat isn’t contaminated, etc…. An arbitrary order requiring agencies to cut two regulations for every new one they create conceivably endangers us.

How does Trump plan to enforce this order?  How is someone supposed to tell the difference between a “new” order and modification or clarification to an old one? How is Trump going to implement his promised changes to Obamacare alongside this latest executive order? In order to change Obamacare many “new” regulations will have to be written.

Trump needs to vet his executive orders or he is going to lose credibility and support, at home and abroad. He needs feedback on these proposed orders from the people tasked with enforcing them. He needs input from people who have years of experience in federal government so he is aware of the ramifications before he makes orders that effect thousands, perhaps millions of people. The pace at which these ill-conceived executive orders are flying off Trump’s desk conjures images of Don Quixote tilting at windmills. America is great and we have been great for so long because our presidents have the respect and backing not only of our citizens, but of world leaders. It’s been just over a week and Mexican President Enrique Peña Nieto cancelled a meeting with Trump and scores are calling on British Prime Minister Theresa May to un-invite Trump to a glitzy state visit.

Instead of doing the hard work of governing, things like vetting executive orders by talking to those who actually have to enforce them; Trump appears more likely to continue fist pounding over his delusions of voter fraud.