Nobody should be allowed to burn the American flag – if they do, there must be consequences – perhaps loss of citizenship or year in jail!

Before the president-elect takes an oath to uphold the U.S. Constitution on January 21, 2017 perhaps someone should give him a crash course on this foundational document – starting with the First Amendment. 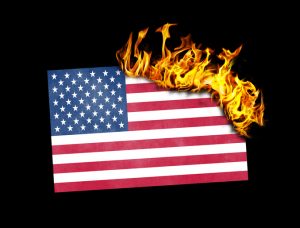 You know the First Amendment. This is the one that guarantees freedom of religion, freedom of assembly and freedom of speech. And, like it or not, flag burning is a type of free speech. Just ask Gregory Lee Johnson.

In 1984 Johnson was arrested outside of the Republican National Convention in Dallas for burning a U.S. flag. He said his conduct was done to protest then President Ronald Reagan’s policies. In his defense, Johnson argued his conduct was symbolic speech and therefore protected by the First Amendment. A Texas court rejected this argument and convicted Johnson.

Johnson then appealed his conviction to the U.S. Supreme Court, which in 1989 ruled that flag burning is symbolic speech protected by the First Amendment. The court emphasized the fact that freedom of speech protects actions society may find offensive and that social outrage is not a constitutionally sound reason to suppress free speech.

Congress responded to the high court’s upholding of flag burning by passing the Flag Protection Act in 1989, which attempted to ban the conduct. A few days after this law took effect, several people – including Gregory Lee Johnson – burned the flag on the steps of the U.S. Capitol. However, in 1990 the Supreme Court issued its second decision on flag burning – striking down the Flag Protection Act for violating the First Amendment.

Johnson didn’t defend himself when he was tried in Texas, or when his case was argued before the Supreme Court. Rather, he was represented by skilled lawyers. At the Supreme Court, Johnson was represented by talented civil rights lawyer and activist William Kunstler and First Amendment expert David Cole – attorneys who may not have agreed with Johnson’s politics, but who almost certainly believed in his right to state his opinion through expressive conduct.

Lawyers are members of an often vilified profession. (OK, sometimes for good reason, but that’s a topic for a different blog post.) The truth is that lawyers serve an important function in protecting and maintaining the Constitution, which, in turn, protects everything all of us do every day. The Constitution protects our right to own property, work in the job of our choice, marry the person we love and raise our children – preferably with a minimum of government intrusion.

The Fourth Amendment protects peoples’ property and papers from government intrusion without a search warrant or without probable cause. Every day in courtrooms around the country there are lawyers fighting to protect the Fourth Amendment, to make sure the government isn’t encroaching on the protections guaranteed to every person in this country.

The Sixth Amendment to the Constitution guarantees people the right to assistance of counsel when they are charged with a crime. This same amendment requires “adequate assistance” of counsel, that every lawyer defending a person in a criminal case knows what they’re doing and do their job to the best of their abilities. Lots of people don’t think this aspect is important. They don’t think criminals necessarily deserve the best possible defense, that is until someone they love is charged with a crime – sometimes wrongfully – and then making sure a lawyer provides the best possible defense is paramount. This dynamic is why it can’t be a slippery slope. Lawyers can’t protect the civil rights of only those people who are innocent, or only those people who “deserve” it. We have to protect the civil rights of everyone.

Trump’s comment about flag burning scares me personally. Not because I’m pro-flag burning, but because I am pro the First Amendment, and the Second, and the Third and so on. I have devoted my professional life to protecting people’s civil rights and the Constitution of this country. I don’t want a president who is going to trample the institutions that make this country great. I want a president who respects the rule of law, the laws of this nation and who above all, is devoted to the principles for which this nation stands.

Remember our Pledge of Allegiance? “One nation with liberty and justice for all.”